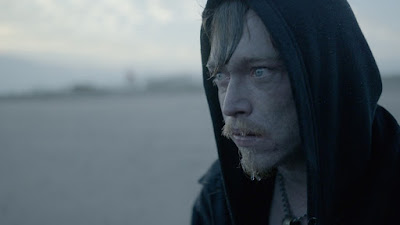 In To The Night Caleb Landry Jones is an artist obsessed by the death of his parents years earlier in a fire. A complete and total mess he begins to disconnect from reality causing troubles with everyone around him especially his wife and new born child. It also sets him on the path to his own destruction…

Dark moody film more concerned with recreating Landry’s headspace than being a straight forward narrative, To The Night is going challenge its audience to like it’s hero. Occasionally normal and loving but more often bat shit crazy and struggling to hold on to a normal mind set, Landry’s character tests and tries our willingness to not only go into his head but like him. His behavior is at times tough to take.

Equally tough to take is the film itself which gives the audience no quarter. You either belt in and go where this film is taking you or you don’t. I belted in and took the ride but I’m not sure it’s worth the ride. Like our hero’s art this is a film that challenges you to confront it and what it is showing you. The trouble is that instead of looking at an installation for short amount of time To The Night is almost two hours of punishing head space. While I don’t mind walking around with someone else’s thoughts in my brain now and again, I need a reason to do so. I’m not sure To The Night gives us a reason. Personally I think this is two hour attempt to provoke us into feeling but with no real reason for it beyond it being able to do so.

Honestly while I made it to the end of the film with its uncertain final images, I was lost to it about a quarter of the way in. This was form over substance in the most pretentious way. I kept watching the film hoping that somehow the film would snap together to mean something or give me insight instead of just watching Jones give an Oscar worthy performance in film that just sets him adrift.

While I know that some people love the film, hence it’s appearance at multiple film festivals, I don’t think the vast majority of film goers, even those who love the off beat and weird, will ever respond to it. Frankly it’s too artsy fartsy in the wrong sort of way.

Not recommended for any reason other than Caleb Landry Jones’s stellar performance (and even then I’d take a pass)
Posted by Steve Kopian at March 23, 2019