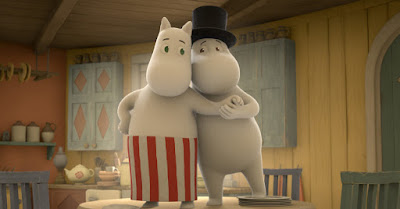 The MOOMINVALLEY that played the New York International Children's Film Festival was not a film as such but to unconnected episodes of the new TV series played back to back. The stories were unconnected to each other.

Episode One was SECRET OF THE HATTIFATTNERS. Which had Moomintrol, Snork Maiden and Little My setting off to a legendary island that Moominpapa always talks about . Once there they encounter the Hattifatteners and have to deduce why they are so interested in a "mirror".

Episode Two was NIGHT OF THE GROKE and it has Moomintroll spending a night alone in the house when his parents go off to spend a life of wild abandon on the beach. Through circumstances he and his friend Sniff end up thinking a giant forest troll is lurking, however things get serious when they encounter the dark shadow that is the Groke, a beast which ill freeze you blood. 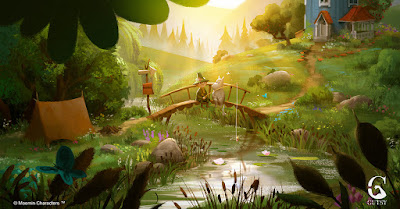 To be honest I don't know what I think of the show. My exposure to the Moomins has been through some random stories and long form features where the stories were allowed to go as long as they had to and not fill a time slot. While beautifully animated and expert and lovingly voiced (Warwick Davis, Taron Edgerton, Rosamund Pike, Matt Davis aong others) the shows seemed to strain in the required 20 or so minute time slot. Things will go for a certain amount of time before ending. Everything is there for a great tale, they just rush to a conclusion. Because I am not a Moomin scholar I don't know if the tales are rushed or not. I do know that the writing, other than pacing, is sharp with some great one liners and lessons for everyone.

For what its worth the audience around me, especially the kids ate it up since they all seemed to be big Moomins fans.

MOOMINVALLEY plays March 9th and 16th at the NYICFF. Both screenings are currently sold out but more tickets may appear- the screening I attended was sold out but still had a lot of empty seats, so if you're interested try showing up. For more information on the  film and the screenings go here. 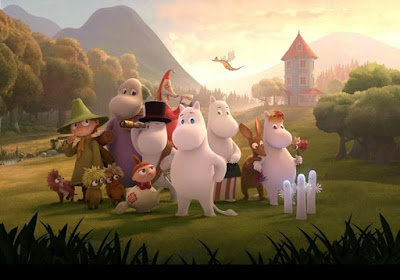