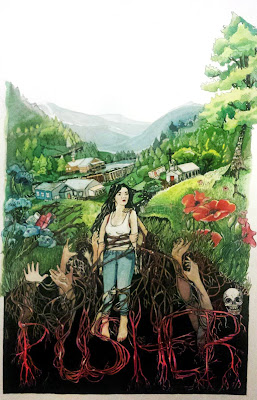 PUSHER is an emotional short about Brittany Lee, a young woman who is both an addict and a dealer. In the wake of her connection telling Brittany that she is done with dealing, a turn of circumstances forces her to reflect and consider the roads that lead her to this place.

Gloriously low key PUSHER is a reflective slice of life simply lets life unfold. There doesn’t seem to be judgement, there just is life. This is the hard scrabble life of a woman in the middle of nowhere, where there is nothing much to do other than drugs. As one person infers toward the end there really wasn’t much choice not to become an addict since where they live there isn’t much else to do. It’s a sad but tragic fact.

Writer, director and star Andi Morrow needs to be commended for her small gem of a film that rises above so many other films with similar plots. As someone who spends a great deal of time in the inde channels of filmdom I’ve seen five to ten films each year over the last decade that highlight the drug problem in rural America. There is sameness to many of them. Morrow beautifully avoids all the pitfalls and sameness making a rich character study that gets under your skin and breaks your heart. It is a film that engages us on both an emotional level and an intellectual one, forcing us to consider if we were in similar circumstance if we would end up following her path.

PUSHER is a must see. It is not only a solid movie and a calling card of a filmmaker to watch.