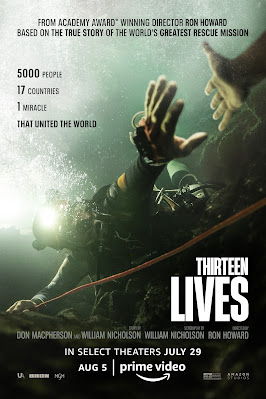 13 LIVES is Ron Howard’s version of the rescue of 13 members of a football team in Thailand when a sudden heavy rain storm flooded the passage out.

This is a solid retelling of the events that happened in 2018 when the world came together to try to get the boys and their coach out. Focusing on the Western divers experienced in cave diving, the film gives us a real sense of the dangers of diving into the close quarters of the cave. While the film leaves a lot of details out (including Elon Musk’s boneheaded side show of suggesting a submarine would be best) it gives us enough to make us hang on every turn, even if we know how it’s going to go.

If there are any real flaws it’s perhaps we don’t get to know the Thai rescuers or the kids who are trapped. I don’t blame the filmmakers, more that everyone involved in this story sold their story to someone to make a film of their story, as a result the film (and the earlier National Geo doc THE RESCUE) were limited in what it could discuss in detail.

Ultimately this is a nail biter and worth a look