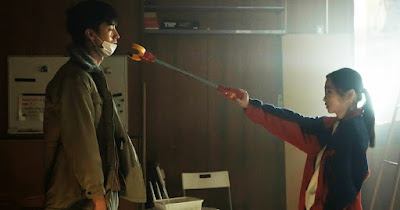 Shinzo Katayama's MISSING is a hard film to discuss. It's one of those films that starts off seeming to be on thing and then turns and turns and turns and ends up not being what you thought it was going in. Yes it is most definitely a thriller, however there are other things going on. I mean at it's heart its the story of a father and his daughter...and there are some other things going on which you really need to just see.
The set up of the film is about Kaeda. She is desperately trying to deal with her father who has completely broken after the death of his wife/her mother. He simply doesn't want to do anything. Then suddenly he announces that he knows who the serial killer No Name is. He's seen him on a train when he briefly took off his mask. He's going to find the killer and bring him to justice. Not long after he begins his quest he disappears and Kaeda is left to try and figure out what happened to him.
I won't say more
Actually I dare not say more because there is enough going on here to make you sit up and take notice. It's the sort of a film that signals early on it's not going to do what you expect so you lean way in and are in for the whole ride. As a result it kicks you in the gut in the best sort of way.
High recommended.
Posted by Steve Kopian at August 01, 2022