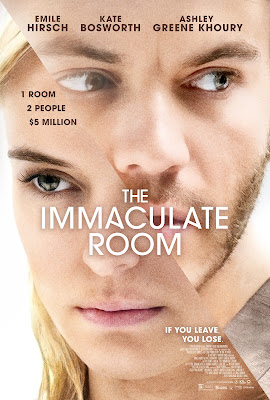 As part of an experiment a couple is to stay in a huge, largely barren, and completely white room for 40 days. If they last the whole time they will be given a huge fortune. If either one leaves before the end they only get a million dollars. As time goes on they must take part in various games which are designed to break them.
This film has a script that would have been killer on stage where the intimacy of the theater would have drawn us in. The ability to see two people dismantle over the course of an evening would have been magical and everything the theater is best known for. Seriously the thought of seeing stars Emile Hirsch and Kate Bosworth break apart would have been a hot ticket on Broadway.
Additionally seeing a story on stage allows stories that could never be in real work for our entertainment. We forgive twists and turns because of suspension of disbelief and the need to allow for modifications of being on stage. With film you have less leeway because it’s closer to reality.  I mention this because THE IMMACULATE ROOM takes numerous turns that would work on the stage where we  forgive  but on screen they really don’t make any sense.
The first thing is that makes no sense is the couple have no real idea what they are getting into going in. They are woefully oblivious to the rules of anything until they get in. The scene where they are reading the rules when they went in makes no real sense to me since you would think they would have some idea what they were getting into.  Most of what follows doesn’t feel natural.  The turns all feel like they are there just to drive the plot forward, rather than something organic. I also take umbridge at not really knowing what the point of this “experiment” is, more so with the ending being what it is. I was left wondering what the point of it all was rather than being moved.
And that is rather sad because Hirsch and especially Bosworth give two stellar performances.
Outside of seeing two great performances I can’t recommend a trip to this room.
Posted by Steve Kopian at August 18, 2022