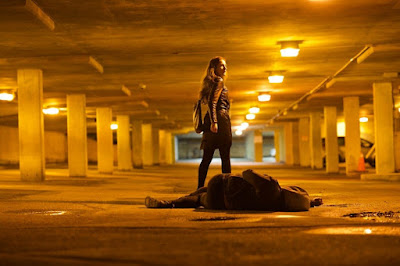 After Wally takes out her anger and frustrations on the chef who was sexually harassing her friend, she begins to hunt men who are taking advantage of women.

This is a much too mannered film of female empowerment by way of a Death Wish/MS 45 like vigilante. While the idea behind the film is really good, execution is not.

Designed to make a point over and a above it all this heartfelt scream about the #metoo movement never engages. The film is constantly trying to argue it's point at the expense of the story.  For example the dialog is much to measured and full of meaning, the male objects of rage are largely ciphers that we barely see (is this supposed to mean all men are evil?), and the performances are much too mannered to be real much of the time. The result is that the parts that are polemical seem to be a different film with characters disappearing during the "speeches".

I also have some quibbles with how some sequences , particularly the ones involving Wally assaulting men were filmed. The shot choices seem less than idea and rather static with the result there is no tension. It doesn't help that the music used in the attack sequences seems meant for another film with shots seeming not to match up to the beats of the images.

While the film isn't bad, it isn't what it should be.