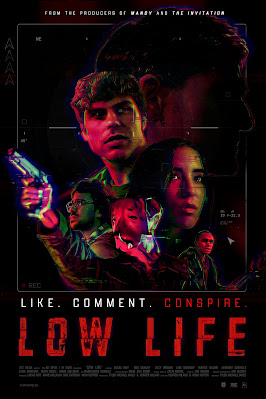 Be ready to hold your head in your hands because LOW LIFE is going to mess you up.

The plot follows a You Tuber who has made a name for himself catching men who prey on kids for sex. Things go horribly wrong when a predator shows up at his house…and what happens is the film.

I’m not saying any more. I dare not. All I will say is that everyone on screen is going to have a bad night, an incredibly bad night for reasons no one can expect. Frankly Liz Whittemore was right when she told me that this is the first film in years where she had no idea where it was going to go. I would add that the twists and turns don’t seem out of place which makes it even tenser because nothing is coming at you out of left field and you feel like you should have seen it coming.

I really dislike that this film is not playing in theaters because I can only imagine what a theatrical screening of this film would be like. Lots of murmuring and people talking out loud to no one. People covering their eyes and ears because they are so uncomfortable.

Oh yea- this is not a film of physical violence, though that’s here, rather it’s a film of uncomfortable behavior by unpleasant people, bad choices and awkward discussions. I mean the film begins dwelling on child molestation and goes from there.  It  reminds me of the skeevy film CHILDREN OF THE DARK that played the New York Asian Film Festival which lived in a similar world and which made you feel dirty enough that you’ll want to shower when its done. You may want to shower when LOW LIFE is done as well.

This film is a punch in the face.