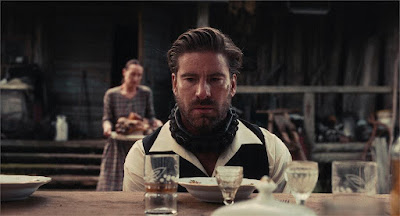 While on a trip to Eastern Europe a  man, who doesn’t speak the language ends up chained with the pigs by a pig farmer. As he tries to figure out how to escape he is befriended by a pig.

Off kilter black comedy fairy tale is either going to thrill you or make you want to flee. Its a twisted tale that is not for all tastes. Its a very knowing tale that is very interested in making a point of some sort. I’m not entirely sure what that point was or more damagingly if it’s even a valid point. Frankly despite being about pigs this film is really just a long rambling shaggy dog story. I was willing to go with for a while until I suddenly began to realize it wasn’t going to go anywhere. There was a point some way past the half way mark where I got a sense that this was heading toward an WTF ending. While it’s not WTF it is a head scratcher.

Frankly I think that despite the director’s thoughts this film really doesn’t have a point.