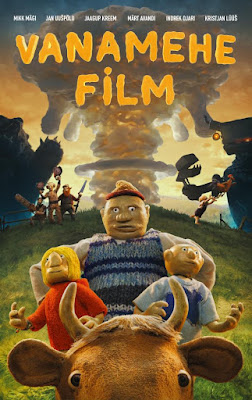 With THE OLDMAN THE MOVIE hitting digital release Tuesday here is my Review from last year's Fantasia
What do you get if you cross Shaun the Sheep with A Town Called Panic and filter it through the mind of kid who likes poop jokes?  The answer is THE OLD MAN THE MOVIE, a wickedly funny very unPC comedy that was spun off of Estonian TV series.

The plot has three kids going to stay with their grandfather  on his farm for the summer. The kids end up releasing his cow who wanders off the farm. The grandfather is horrified, but things take a turn for the worst when a wheelchair bound "old milker" shows up to say that the cow has to be found lest it make too much milk and explode in an explosion rivaling an atomic bomb. As the grandfather and kids head off on the tractor to find the cow, and bring her back, the old milker gets some chainsaw wielding nut jobs to help him find and kill the cow. WHat follows is a steady stream of off the wall jokes and turns you'll never see coming.

Rude, crude and sure to shock any parent who unwittingly takes their young ones to see "an animated film" the film will delight adults and older kids who love off color jokes. The big kid that I am I was roaring from start to finish wondering at what point this film was going to hit the US and take over the world.

Wrong on so many levels and right for exactly that reason THE OLD MAN MOVIE is one of the best films playing at Fantasia, assuming you are looking for well done films in bad taste. Highly recommended.