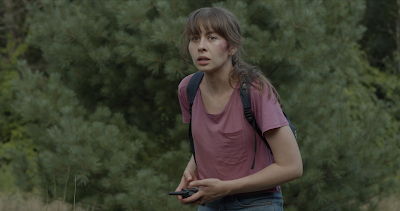 Caroline is a young woman who wakes up at the bottom of a cliff in the woods. She had been camping with a friend and somehow ended up a battered and bruised at the bottom of cliff. She then has to walk out and try and figure out what happened.

This painfully dull film is a film you can skip. Nothing much happens over the course of this film which spends most of the first hour following our heroine wandering through the woods trying to find her way home. After a brief encounter we’re back to walking in the woods (probably an hour of this 75 minute film is just -Caroline either walking in the woods or sitting alone by a fire)

I was a big fan of directors Terrence Krey and Christine Nyland's earlier film AN UNQUIET GRAVE. In that film not a hell of a lot happens until the ending, however the film builds tension by having the two main characters discuss the situation and what they are trying to do. Unfortunately this film is largely a one woman show, and while the its interesting for a bit, the film kind of collapses in on itself when nothing  happens except walking and we begin to ask questions about the why and how of some events.  I watched this film twice, hoping things would click but the second time through (because Liz Whittemore said she liked it more than I did before I could post this review) but I was more flummoxed.Yes I know that the film is the story of a suicidal woman deciding she wants to live, but there is little here to engage the audience through the film’s over length. Yes  we don’t know what happened at the start but it’s pretty clear early on what the story is, we just have to wait for the grand revelation to happen on screen. The recent film THE INTEGRITY OF JOSEPH CHAMBERS is similar in that not a great deal happens, until it does, but at the same time it gives us more to look at then just someone wandering through the woods. CHAMBERS builds character through actions more than just walking and sitting by a fire with a pouty face.

To be honest this would have been a great short film but stretched to feature length its deadly dull.