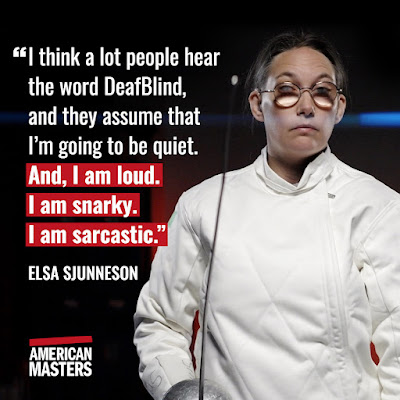 Portrait of Elsa Sjunneson a deafblind woman who is also a fencer, an essayiest, a speculative fiction writer, a comic book writer and several dozen other things.
This is a short film that connects to and expands upon material in the American Masters film BECOMING HELEN KELLER.  It is also a killer portrait of a woman  who probably needs a whole feature about herself. There is simply too much to here to fill seven minutes without making you want to know more.
This is a solid short portrait. Sjunneson is a hell of a woman, and she is the sort of person we need now. A crusader for the rights of those with disabilities, and pretty much everyone else, she  is  woman who will not be stopped , nor does she want anyone else to stop.
This is a super film. Its a film that made me  smile and filled me with hope.
Highly recommended.
Posted by Steve Kopian at August 15, 2022