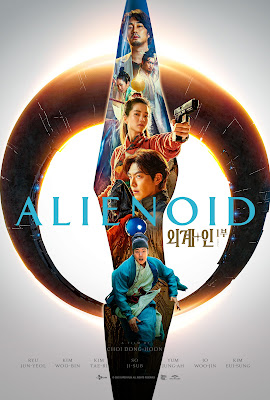 One of the most anticipated films for this year’s New York Asian and Fantasia film festival was not available for screening  unless you went to the festival to see it. The press screeners were not available so I had to wait until the film was ready to be released to theaters this week to see it.

Excited when my turn came I made a huge bowl of popcorn and then sat down to see one of my must sees.

This is the first half of a big budget crazy science fiction time traveling action film. The film has aliens merging their criminals with humans and holding them on earth.  In 14th century Korea one of the criminals break free and is stopped by a team of good aliens who crash through time in an SUV kill him and then jump back to the present taking the child  of the villain’s host back with them.  Ten years on they are raising the young girl and dealing with the occasional outbreak.  However events in the past where two wizards and several other people are looking for a divine blade that will defeat evil are beginning to have an effect on the present and things are starting to get messy as more aliens begin to arrive and time begins to crack.

I don’t know what to make of it all. Half way into the film I found I was enjoying the motion  despite not having any clue as to what was going on. However by the end of the film I started to tune out. The motion and the complications of the plot seemed to become more and more contrived as the film tried to build up to a cliff hanger ending that will bring everyone back for next year… because this is only the first part of a two part story.

And that’s the rub, this is only half a story. There is more to come down the road, and despite there way too much going  to be contained in even another film I’m not sure there is enough to to justify coming back in a year.  Yes the action is spectacular, but there are too many characters to fully get a handle on most of them and as a result we don’t care enough about them to consider coming back for part two.  I say this because in many ways this film reminds me of an attempt to duplicate the Infinity War saga from the MCU. The problem is that where Infinity War and Endgame could use short hand for its character development because it had over a decade of films leading up to that moment, ALIENOID has nothing. We only know the characters that stand before us and they aren’t clearly defined. Outside of one or two there is no one I need to see in another film. Yea, I’d like to see what happens next, but I’m not dying to know. Honesty I’ll probably have forgotten what happened here by the time the next film comes out and I’ll have to rewatch this before I see the next one.

I suspect this will play better when I can see it all at once, but until then this first film is a spectacular motion machine that doesn’t add up to much.

While not really bad I’d wait until next year when you can see it all.