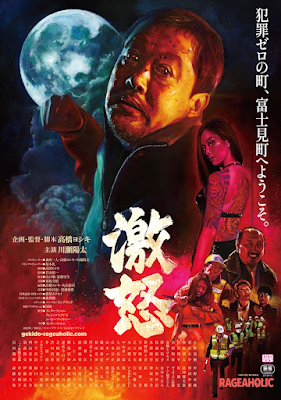 A loose canon cop is sent to  New York in order to get treatment for his violent tendencies. When he returns he finds the city has changed.  Societal rules are being ruthlessly enforced. Those who cross the line are ending up dead.  What is the dark secret behind it all.

If you do not like blood, gore and graphic violence stay away. I mean seriously stay away. This is not an idle warning since a couple of things in this film had me looking away and groaning. Yea some of it is cathartic in a good way its still stomach churning. I say that now because what I have to say next might make you want to see the film.

It is in it's way a masterpiece of social commentary about the evils of polite society. It's a blood brother to Kubrick's A CLOCKWORK ORANGE with it's updated look how the powerful will try control of the outsider. It's also a biting commentary on the ugliness and bullshit hiding behind the face of polite society. In all seriousness this scrappy little film has more to say that any other narrative that I've seen this year. Comedy and violence aside there is enough going on that this is going to end up being taught in film classes in a few years.

As complex as the film is thematically the reality is that everyone is going to be coming to the film for other reasons. The films technical end, the visuals and the structure of the film are going to delight people who love a film crafted at the highest level.  The comedy is going to delight those who can appreciate both sly wit and low brow humor. And then there is the violence, the literal bone crushing, blood splattering violence  which will delight the action fans and blood hounds. I loved it all.

What delighted me is that the film is so carefully crafted that while the film looks low brow and rough, it isn't. Director Yoshiki Takahashi, has crafted a film that works on numerous levels  beginning with putting us in a world with a tactile feel of reality. AT the same time it also adds to the effect of the violence. The fights feel real, not carefully choreographed. We wince because what happens is real, with most of the violence taking people down in one or two shots. Takahashi also crafts the story in such a way that the violence is such that we are wincing , forcing us to ponder if violence is the answer, even as we are cheering  with cathartic release  at the bad guys going down.

I'm sorry if I am rambling but there is so much here and I need another couple of viewings to do it justice, however there isn't enough time to do so and get this up in a timely manner.