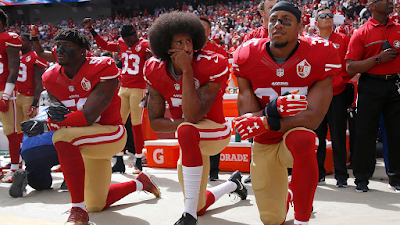 A look at Colin Kaepernick and his influence on America in the aftermath of his refusal to stand for the National Anthem.

As good as the film is in putting things into context  the problem with the film is that because there is a heavy use of news footage the film kind of has a feeling that we have been here before. We’ve seen so many of the images before. It’s the same selection of images on racial strife that have been appearing on all of the news. Additionally the footage we get of people unhappy with Kaepernick are all variations on the exact same theme. While I understand that is the way people feel, at the same time it seems repetitive.

The other problem is the film always seems to keep us at arm’s length. We are never brought in. While we hear Kaepernick’s voice from speeches and in video we never feel as though we are there with him. The things we are hearing him say are not really personal. They are either typical sport related statements or later speeches he is giving. We don’t get any sense of who he is as anything other than as an icon. It’s made worse by the fact that almost all of the talking heads tell us about Kaepernick and events, but we never really get a sense of them from people who were there. This film really could have used Kaepernick to have been on camera and talking about events.

The result is a film I admire more than like.