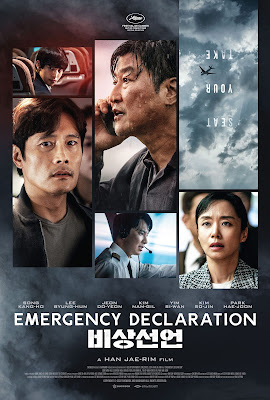 As the police are informed that some people think that their neighbor is the guy threatening to do something to an airplane, the same neighbor gets on a flight looking  to do something terrible. The police quickly learn that the man has done something with a horrible disease and have to race to try and find him...just as someone on the flight begins to die horribly.

This is a killer film. Planned to be made at the time that covid shut the world down the filmmakers took the time to tweak their script and production with an eye of making this as realistic as possible.  They wanted it all to be as close to what would happen as possible. It was a move that paid off with an absolute killer thriller. This is a film that is quite simply going to make some people not want to fly.

I was rocked. This film grabbed me from the opening moments and dragged me white knuckled to the end. Yes, I knew some of this was a bit too neat and too formulaic, but at the same time I was so invested  I didn't care. I was willing to follow this anywhere because the cast, which includes greats like Song Kang-ho, and Lee Byung-hung, sells it. You believe because they believe.

I had a blast watching this. I was so in love with this film that I wished I was sitting in a theater with a big bucket of popcorn and a grape Hi-C  and losing myself in the madness.

Recommended for those who want to take a white knuckle flight.