We Are Living Things (2022) opens Friday 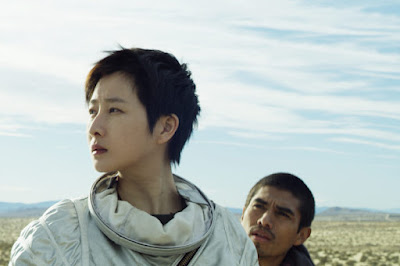 A workman taking up with a Chinese woman living in the US illegally. She is traveling under someone else's identity. The pair seem to know each other and they both share an obsession with an alien abduction that may or may not have happened.

WE  ARE LIVING THINGS haunts me. I saw the film a couple of weeks before Slamdance and the film flipped a switch in me. Some how it just clicked with me and I have been haunted by the films look and feel and some of the scenes. I don't know why because in a weird way it doesn't do anything special except tell a compelling story.

I have held off writing about the film because I'm not sure what to really say. My thoughts on the film are not about plot and detils but emotion. The film kicks up certin emotions that I can't really describe. It's hard to write up a review that says "I liked the film because it had a certain feel"  and then not be able to explain it.

Basically what I need you to do is take it on faith that WE ARE LIVING THINGS is worth at least trying. I'm not going to say that you'll fall in love with the film, but I think you will, as with all Slamdance films, find that there is something interesting there. This is basically a film you need to experience more than read about- mostly because my words can't express what I really want to say.