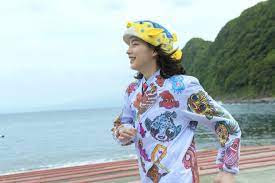 This is the story of Japanese celebrity ichthyologist, Youtuber, TV host, illustrator and all-around “fish ambassador” Sakana-kun, here called Meebo. She was an obsessed young girl who followed her heart and love of fish to international fame.

The word coming out of Fantasia regarding this film was the talk of the New York Asian Film Festival. What I mean by that was that people at Fantasia were calling people at NYAFF telling them to see the film at the festival. The trouble was that the THE FISH TALE wasn't playing NYAFF which left everyone in Fantasia kind of incredulous (I heard more than one person ask "why not?" on a cellphone call)

Having seen the film I'm wondering why this film didn't get picked either.

What an absolute joy and must see.