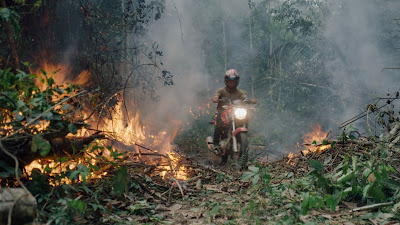 Get ready to get pissed off as we watch how the indigenous Uru-eu-wau-wau people are slowly being squeezed out and hunted by people looking to get themselves some land to farm. Spurred on by Brazilian President Jair Bolsonaro's hateful rhetoric people invade the protected territory and destroy the rain forest.

Its a sad thing to witness because many of the people coming to tke over the land think the Uru-eu-wau-wau just live off the land and don't create anything. They think they should go get  life. Its tlling that these same people note how much cooler it is in the jungle than on the farm land they covert, but they stillwant to have farm land. Its also sad that all of the small guys causing the destuction  in the invasion will in all likelihood end up taken over by big farming companies.

Half way into this film I was so  pissed off I had to pause the film and calm down.. The stupidity of the people trying to take all the land is monumental. They can see the problems with trying to turn the jungle into farms but they don't understand it. I was well aware of the trubles but this film gave it a very real face.

This film is a stunner. Its a film that will clearly show you what is being lost to the world by the destruction of the forest, not just the human cost but the envirmental one as well.

One of the best films at Sundance it is highly recommended