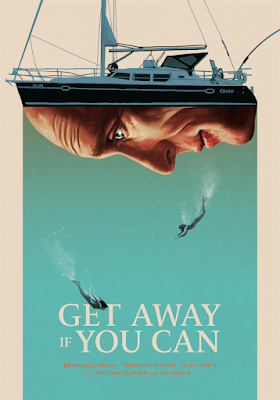 Terrence Martin & Dominique Braun write direct and star in a film that is in the running for most pretentious film of the year and possessing a title that best sums up my feelings for the film
The filmmakers play a couple who sail off to sea. As they approach the islands of despair their relationship goes through a trial as both reflect on their paths and try to forge a path forward.
Some good, if occasionally uneven performances get lost in a film that isn't always clear. There are lots of flashbacks, flights of fantasy and moments that seem to have come from left field. Little is explained and when it is, we are frequently left feeling like we should told just a little bit more. I kept feeling like someone cut the first minute of many scenes.This is a film where silences are meaningful, and it would be nice but the film never grounds us in any sort of place and we are adrift from the first moments. Yes some of this does come together but not enough.
On the plus side the film is frequently stunning to look at, with the film containing some of my favorite images of the year. The film also contains a kickass performance from Ed Harris, which isn't surprising since he's never bad.
While I am almost tempted to recommend it for Harris' performance there simply isn't enough here to do so.
Skip this one.
Posted by Steve Kopian at August 19, 2022