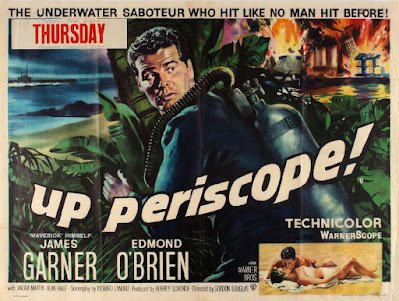 Based on a novel and having a plot similar to Destination Tokyo, Up Periscope is the story of a navy frogman (James Garner) who is tasked with being dropped  near a certain island where he is to make his way to a Japanese base where he is to steal the Japanese codes. He is to be dropped there by a sub commanded by a by the book captain whose action caused the death of some of his crew despite saving the sub and the rest of his men.  O’Brien is still shaken by the experience and warns Garner that he is going to go by the book, however as time goes on he bends, putting his crew in more danger in order to make sure Garner succeeds.

This is solid entertainment. I have no idea how accurate it is but it is gripping. To be certain some of the window dressing could be lost, Garner being chosen by the girl he is romancing for example, but the rest is perfect popcorn material.  To be certain the film is a bit to close to DETINATION TOKYO, having cribbed some sequences, but at the same time the film steals from the best.

Honestly when I was done with a recent TCM screening where I saw it for the first time I was delighted to find a new film I could pop on just to chill.