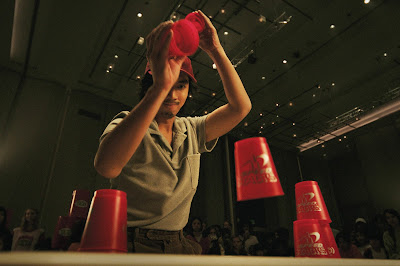 Young man with a wicked skill in sport stacking is helped by a regular girl to to all he can be and along the way the pair become friends and help a lot of other people along the way.

First thing you need to know, sport stacking, people stack and  then unstack special designed cups in a prescribed pattern as fast as possible,  is a real thing. There are associations for it and lots of video. I say this because I thought it was something created for the film. I was wrong.

I had no interest in this film. Despite the film opening the New York Asian Film Festival and screening a few days later I was going to take a pass. Then I spoke with people at NYAFF who were raving about it. At the end of the first week of the fest everyone was raving about how it was the best film at the festival so when I got the chance to see it for Fantasia I jumped.

I love that the film is its own thing. It doesn't follow any film cliche it goes off on its own merry way and simply tells it's story, passionately and in it's own way.