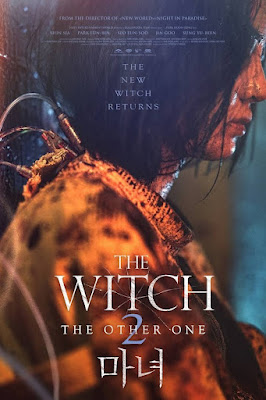 Full disclosure, I never saw the previous film THE WITCH THE SUBVERSION. I mention this because I went into THE WITCH PART 2 thinking it was a sequel to a different film. Twenty minutes in, feeling hopelessly lost I stopped the film and rechecked the films description and when I realized I was in the wrong place, I read on the first film.  Sadly I was still still a bit lost watching this film.

The plot of the film has a young woman escaping from a super secret facility and going on the run. She's a young woman with special powers that everyone wants to control.  As she takes up with some people who don't know who she is, various people hunt her.

This is a great looking film with style to burn. It has some great action film and...it left me feeling like I should have seen the first film. Yes the plot isn't anything we haven't seen before and yes it hits a lot of expected notes so I could follow it. But at the same time I never stopped feeling that I was missing something.

Because I felt lost and I don't think I could give this film a fair shake I'm simply going to point you toward the film and say if you saw the first one give this one a shot. If you haven't seen the first one see that one first before you try this.