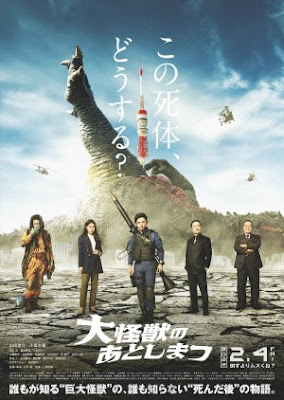 WHAT TO DO WITH THE DEAD KAIJU? Was near the top of my must see list for Fantasia. I was curious to see what filmmakers were going to do with the obvious question, what do they people do with dead giant monsters after the battles in various films. It was a question that I wanted answered, kind of like wanting to know what happens after a superhero battle in the comics (Marvel answered that with Damage Control)

In WHAT TO DO the action picks up after the rampaging monster was killed by a mysterious light from the sky. As everyone rejoices, the government tries to deduce if the beast is indeed dead.  Once they realize he is, they then have to figure out what to do. Tourism is a possibility. As other solutions are suggested, it's realized that corpse is decaying and that trapped inside its tough hide gasses are building up and it could explode sending flesh and toxic gases everywhere. It now becomes a rush to solve the problem.

This is an interesting, if messy, comedy satire that sends up all sorts of kaiju related films. Its focus on bureaucracy makes it a direct riff on SHIN GODZILLA but there are even more references to other films, including Ultraman, whose rethink also played Fantasia. The kaiju fan in me was delighted by most of what I saw.

The problem though is the film is all over the place. The comedy ranges from low brow to witty references. It never settles on a tone.  Additionally while I was watching this I kept wondering if this wouldn’t have been better had it been played straight, with it all a kind thriller to solve the problem before an unexpected disaster. It’s so all over the place that I completely understand the weak IMDB rating, it really doesn’t work on it’s own terms.(You really need to be a die hard kaiju fan for this to work for you)

On the other hand as a spoof of kaiju with all sorts of references it a delightful footnote for giant monster fans.