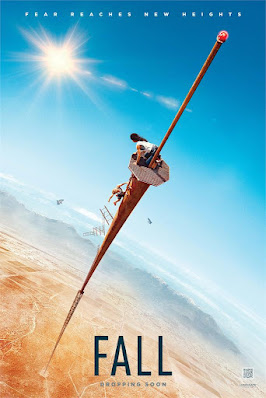 If you have any interest in FALL go see it in a theater with the biggest screen possible. The film is pure movie spectacle and it needs to be seen as BIG as possible. Honestly if any film was made for IMAX this is it.

The plot of the film has two women going to climb a disused radio tower in the middle on nowhere. Called the fourth highest structure in America is it an abandoned metal tower over 2000 feet tall. One of the women is trying to get over the death of her husband  a short time before. He had fallen in climbing accident that she feels is her fault. Once they get to the top a section of the ladder breaks away and they are left stranded.

This film is all about the visuals. Its all about being on a tiny platform thousands of feet in the air. The visuals make the film and if you don’t like heights odds are this film is going to make you sick.  Yea, it you know it was done with green screen and tricks photography  but at the same time the result is as truly a harrowing experience as you will ever have in a movie theater.

The trick is that you really have to see this film in a theater where each turn is going to make you and those around you scream. If you don’t see this on the big screen, say on a TV or laptop (as I did), this is going to play to much lesser effect.

The problem with this film is that outside of the visuals there isn’t much here. The plot is nothing we haven’t seen before and its pretty much something that we could write ourselves. If you want to know how my the numbers the film is consider that one of the producers has made several similar films set in other locations where one or two people are stranded in a scary situation (often with sharks).  This film is so rote that the scenes of questionable steel cables and magically unscrewing bolts produce snickers instead of chills. And then there is one turn that had me literally screaming profanity at the screen threatening to kick the filmmakers in their privates because it was a total bullshit turn.

Of course had I seen this in a theater I would have felt differently since the images would have over whelmed the stupidity.

Recommended only if you can see this on the big screen because the images will make you forgive the stupid turns.