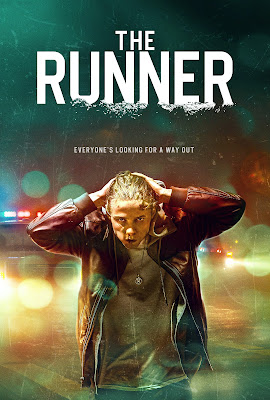 Aiden is a rich  high school kid who is into running and drugs. After his mother turns him into the cops he is forced by the police to work as an informant unaware of what it is going to cost him.

I'm really not sure what I think of this film. To be honest, the cast is great, the crime stuff is compelling but the script is really bumpy. It tries to paint Aiden as basically a good kid with problems, but a lot of the time he comes off as an absolute jerk. One minute he's cocky and the next he's not. It didn't seem to me that it was a matter of him having different sides, it feels more like they simply have him behave as they need him to at the moment. The film also tries to do somethings with things shifting through time via flashbacks but it gets confusing.

I blame the script's wonkiness on the desire to make this film a polemic of sorts. This film very much wants us to consider the dangers of being an informant, however it's doing so by framing it as a slick crime drama. As a crime drama this film kicks ass,  the problem is the film occasionally wants to fold things into seriousness. The film isn't that. This is a really good, really solid crime drama that doesn't need to have pretensions spray painted on to it.

I need to apologize to the filmmakers and to you the reader because the flood of promotional material which pushed the deeper intentions of the film. Had I not been exposed to it I think I would have enjoyed this more. As a result this is worth a look for crime film fans.