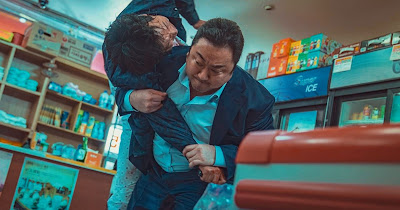 This is a sequel to OUTLAWS, not that you need to have seen that film, Ma Seok-do is a killer cop who is set up as a bad ass from the second scene where he stops a hostage situation cold. Everything you need to know about the unstoppable cop is learned in that one scene. Frankly he’s so kick ass I’m shocked this is only the first sequel.

The plot has Seok-do going to Vietnam in order to pick up a fugitive who voluntarily surrendered. Why he was doing that is a question that bothers the veteran cop and it becomes clear when he finds out that fugitive’s business of kidnapping tourists for ransom and killing them blew up in his face when he picked a mob connected victim and now his boss wants him dead. At this point bodies begin piling up and Ma Soek-do has to follow them to the man behind it all.

Told with wit and speed THE ROUNDUP is a killer film. Moving like a bone crushing wind this is one of the best action films I’ve seen this year. It’s not trying to do anything but entertain and make its audience yelp out loud with delight. This is a film you’ll want to see again and again with all your action loving friends and family. Best of all this fitting sequel to OUTLAWS scores bonus points for being a wonderful stand alone film.

I can’t say enough good about this film.