Brief thoughts on Licorice Pizza and House of Gucci 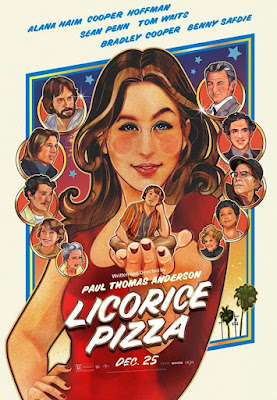 LICORICE PIZZA has me wondering what people see in it. Paul Thomas Anderson‘s tale of high school kid who has a friendship/ romance with a 20 something woman is okay, but I have no idea why we are being told the tale. More to the point I honestly don’t know what people saw in it, and I really have no clue as to why should have been a small drama was shot in 70mm. I understand that the film is based on actual events but to me the film feels more like a bunch of random events than anything with a thematic through line.

Yea, I know that makes me sound like a film snob, but the truth is despite numerous attempts to see this from start to finish it’s more a statement that I honestly don’t know why the film exists. There is no point.

I do have to state that the film lost me early on when I realized that this film never felt real to me.I’m old enough to have been a few years removed from the events depicted, and while I would have been several years younger this never felt like anything like the 1970’s I remember. Granted its set in California where nothing has ever been real, but most film s from or about the 70’s feels right, this felt all wrong and more like movie dress up. 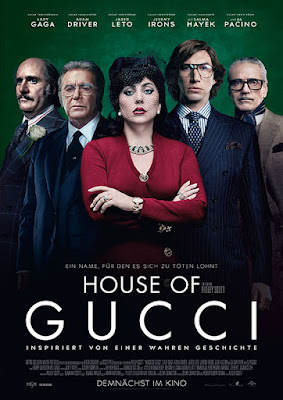 HOUSE OF GUCCI begins with a statement that it’s based on actual events as opposed to being the gospel truth. That’s good because from the first frame the film is retro-conning events to tell its story. This is the story of one of the house of Gucci’s marrying a woman who eventually decides to try and kill him. It’s a film full of big names chewing scenery and a much too playful nature. Yea, I had fun watching everyone be silly and over the top, but at the same time its so goofy you really can’t feel for anyone. The edge isn’t there.

Much too long, the film runs out of steam somewhere in the middle and it just becomes a slog to the end. I enjoyed it  to some degree but I wish it was more serious. I also want to pick apart the time frame of the movie which seems to shift everything ten years forward to little effect except to allow for Lady Gaga to be the right age when events really begin. (Gaga's counter part was 21 when she met Gucci and 40ish when she tried to kill him.)

While never bad, I can't understand why or how this was considered an Oscar contender