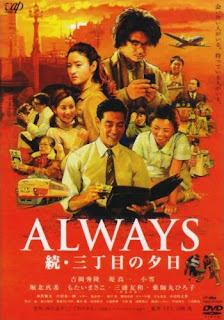 This multiple award winning film is damn near impossible to see in the US thanks to the perceived non-market for Asian films. Quite honestly if they released more films like this instead of science fiction, horror, and action movies, they might find that audiences stop assuming the films are just about action.

Based on a comic book this film is set over a period of months in a small street in Tokyo in 1957. As the story opens one family is waiting for a TV. Across the way is a sweet shop run by a young man who fancies himself a writer. There is a doctor, several kids, and the lady who runs the local hang out. Into the mix comes Matsuko, a young girl from the country. She thinks she is going to work for a big auto company. Instead it's the family who are waiting for the TV and they run a car repair shop. Over the period of time the various characters have misunderstandings, romance, success, failure, and generally get by as the Tokyo Tower is being built in the distance.


This is the sort of film that you know how it's going to feel and how it's going to go from the get go. It's a nostalgic look back at life fifty years ago that is going to have a happy ending. That's not giving anything away; you can feel the ending's emotion at the start and frankly it doesn't really matter, you will still get weepy at the end, and all through the middle.


I first became aware of this film thanks to that stalwart of good programing the New York Asian Film Festival. They had run it, and word coming out from the screenings was wonderful. I had to track the film down, but I wasn't able to do so since the name Always was much too common. What I should have done was look for the full title which is Always: Sunset On Third Street. Eventually I found a copy and ordered it, along with its first sequel, which picks up with the characters a few years later. A second sequel is filming now and takes place in 1964 (if I read the Japanese title correctly).

When I put the film on the first time it was late in the evening and I thought I'd watch a little bit and then move on to bed. Instead I was up until almost 1:30 in the morning watching it, pausing now and again to go to the kitchen or the bathroom or to take a call from a friend. It was so good that when it was over I found that I automatically put in the second film...then stopped it when I realized that the two and half hour running time of the sequel would keep me up all night.

I love this film. I've seen it a couple of times since I got it, in between handing it off to friends to watch. I've created monsters as my friends who have seen it now want me to give them the sequel so they can see what happens next. (No I haven't watched the second film yet).

In all honesty you should try and track this film down. Sure it's kind of predictable but it has a great bunch of characters in it, and it's the sort of film that just makes you feel good. It's a warm and fuzzy feeling film, and the Christmas portion is one of the best holiday sequences in any film I've seen. This one tiny little piece is so good I was tempted to save this review and make it my Christmas film for 2011, but it's just too good to wait, and I had to tell you about it NOW so you could try and get yourself a copy. Amazon e-sellers have it but you should check Yes Asia for a cheaper copy.