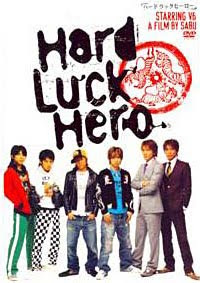 A trifle of a film from director Sabu starring the group V6.

The film begins when a bus boy at an underground club is forced to pretend to be a kickboxer in an underground bout. Its a fixed fight so there should be no danger, but a lucky blow causes chaos...and the bus boy and his friend are off and running with the mob in pursuit.

The film then flashes back to the story of two business men who were in the club when it went down. Sitting at a table close to the ring they are joined by the Yakuza who make them uncomfortable. And through circumstance we see how they end up on the run.

The film then picks up two more characters, who we see were also at the fight, and they steal the business men's brief case ....

Extremely light weight, but containing some big laughs the film is kind of like Sabu light. I suspect that this was a pay check job for the director and he took his well worn motif's and strung them together in a compact package. It's every Sabu cliche brought together for comedic effect, and for a little darkness as well (the thieves tale is dark).

This was not run as part of the Japan Society's Sabu retrospective of Sabu films and it's kind of easy to understand why. Running a scant 77 minutes the film is barely what we would think of as a feature film. There are also more than a few bits that feel like filler. Too many others reference his earlier works.

It's not a bad film but it's the sort of thing that is a great director coasting. I've seen the film once and I think that is probably enough, especially in light of my recent submersion in the films of the director. I don't hate the film, but it's nothing memorable. It's certainly not the worst Sabu film I've seen...and even if it was bad Sabu is better than many directors best work.

The film Drive was described at the Japan Society as the film that marked the dividing line of Sabu's works, with that film being a summing up of all that went before. that maybe the case on some levels, on others this is the final film of early Sabu period since after this he would go off in other more interesting, or at least experimental directions.
Posted by Steve Kopian at March 16, 2011