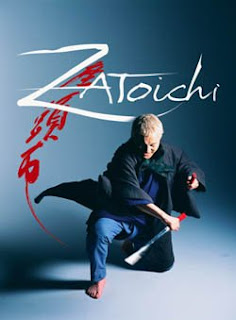 Takeshi Kitano's take on the legendary character of Zatoichi is a great film.

As the lead character Zatoichi (a blind massause who is also one hell of a great swordsman) wanders the countryside, he helps an older lady carry a load. She allows him to stay the night and before long he's involved with the lives in the nearby town, and two sets of travelers who are there for their own purposes.

That's about the best description of the plot that you can get without revealing too much about what's going on in the movie. The danger is not in you knowing what's going on, rather it's the joy of finding out as the film progresses what all the stories are. The stories are told in a disjointed, almost haphazard sort of way, much like the memories they are. The flashback device is both a strength and the film's only real flaw, in that at times we can't be certain for a good portion of the flashback when it's occurring. It's a bit jarring and while I'm certain it will play better on later viewings, here on the first viewing, it kept breaking the spell.

The spell that the film weaves is unique, which is fitting as this is a truly unique film. How many other "samurai" films end with a huge tap dance number? The movie is funny and touching; at times very serious, at others considerably less so. There are explosions of violence and times when nothing happens for a stretch. It tells a simple story of a town overrun by criminals but it also asks you to consider other issues, like what would you do to survive?

The film is very bloody, but not overly so, especially considering that all of the fights involve edged weapons and that Takeshi strove for a realism of sorts by having the battles over almost before they start. There are limbs and blood flying about.

I really like this film simply because it confounds your expectations. It doesn't go and do what you want when you want. There are one or two things I thought were being built up for a punchline, but it never came. There are also a couple of times when I thought things were over but they kept going. This film has a rhythm all its own. There is a music, literally, in what happens on screen, be it farming, training, building, or dancing. It is what it is and makes no apologies for it.

If you love movies, samurai, offbeat or otherwise just see this movie. It will probably stay with you well after you see it.
Posted by Steve Kopian at March 27, 2011