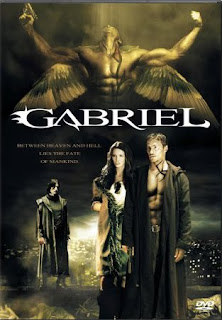 The battle for Purgatory is waged by angels and fallen in landscape that resembles a city of night. Purgatory is hidden from the dark and the light and until Gabriel arrives he has no idea what he's gotten himself into, or what the rules of existence there are. The six angels that have gone before him have either been killed, wounded or become mortal. If there is any hope for the souls that pass through the Purgatory Gabriel must find some way to defeat the fallen who now rule the land and allow the dawn to come.

This is a dark brooding film that looks like its been cribbed from any number of other films, but some how it works on its own terms. Those terms include a bit more style over substance, with the look of the film seemingly geared toward creating the dank mood that pervades the film. The mood seems to be what the film is about since the theology is more the excuse to have super humans running about firing guns at each other.(I'm still not sure why the place looks at it does, or why there are "mortals" but I guess that's the film's conceit and we have to go with it).

In all honesty I had to watch the film twice before I could come up with anything to say about it. The first time it struck me as kind of a purely form over content film with the look of the film trying to make the film seem hipper then it really was. The second viewing made me feel better about the film since I got a sense that perhaps there was more then just the look.

I think the problem is that the film is actually trying to do too much with the result being that the film has to stop frequently to explain things.Several times the film stops dead so that someone can explain to Gabriel the way things are. This would be fine in the real world but not in a film where it slows things down. I don't know why the filmmakers created a story where so much explanation was necessary-actually I do, the premise that the Light can't see purgatory and doesn't know whats going on or the rules is a clever one, the downside is it requires endless explanation.

Ultimately though this is a good little movie. Its worth a look especially if you like the dark brooding look.

One last note-I really hated the eyes of the fallen.
Posted by Steve Kopian at March 10, 2011