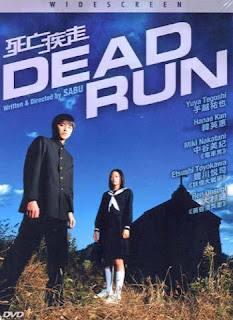 I picked this up on DVD as an in case film. If we didn't pull the week of Sabu films together this film would fill a slot. The trick was that I would have to find the time to actually sit down and watch it in order to have a piece written up for the required slot. Complicating matters was the fact it arrived in the mail just as the craziness of Film Comment Selects, The New York International Children's Film Festival, Rondezvous WithFrench Cinema and a few other things hit all at the same time. When was I going to have time to watch it?

One of the joys of watching a Sabu film is that many times you start to watch a film and wonder what you are watching or why only to suddenly find you're in the middle of things and hooked in the middle of a bunch of characters you care about.

The plot follows a young man, Shuji, from boyhood onward as he tries to find a place in the world and deal with the craziness of life. From the differences between those on real land and those on landfill (off shore), to the crazy yakuza man and his girl (The early scene with Shuji and the bike is marvelous), to his pursuit of a long haired girl who shares his passion for running, and search for some form of the meaning of life. The film is very much the arc of a life.

As with several of Sabu's later films (post Monday) it's very hard to really tell you what the film is about since he has so much going on that you have the choice to be overly wordy or overly brief. Things don't fall into place until the very end.

To me this is one of Sabu's best films. In a weird way his working from someone else's material, this film is based on a novel, frees him up to show how good a filmmaker he really is. Gone are repetitions that fill his salary man movies and he soars in directions that you wouldn't think he was capable of. Yes I love Monday, Drive, Postman Blues, but here as in the film that he made next, Kanikosen, Sabu truly goes beyond any notion of being a one trick pony and shows just how complex he can be. The complexity is almost always there (I think Hard Luck Hero being an exception) but it's often hidden in the rote of some of filmic patterns. Here Sabu is balancing the stories of multiple characters and ultimately story lines and doing so with an ease that one wouldn't think he was capable of based upon some of his earlier films.

I'm not saying that his films prior to this are bad, I'm not, all I'm saying is that like Drive this is the point at which Sabu grew as a director into one of the best one's working in the world today.

This film is must see for anyone who loves great story telling.

Currently out on import DVD
Posted by Steve Kopian at March 17, 2011