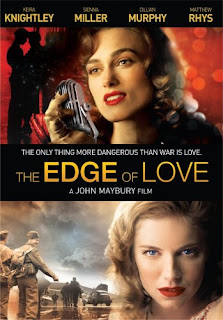 Keira Knightley and Sienna Miller star in the story of two of the women in the life of Dylan Thomas. Knightley is Thomas's boyhood sweetheart he re-encounters during the Blitz. Meeting at a bar they reconnect, however things become complicated when Thomas' brings his wife (Miller) along the next time he meets her. The women hit it off and things proceed at pace until the trio are joined by the man who will become Knightly's husband. This further complicates things as jealousy begins to show its face.

Beautiful to look at, extraordinarily written and wonderfully acted (everyone disappears completely into their roles) this is a sumptuous feast for the eyes and the ears. It

's so nice to see a film about adults being adults. On a purely visceral level I really enjoyed watching the film because the film is so artistically pleasing. Rarely have I ever seen a film that is this beautifully crafted.

The trouble with the film is I'm not entirely sure of everything that happened. Something seemed to be missing and a couple of times I had to replay the film to see if I missed something. Its not bad, but its not completely satisfying as a result. (I tried to look up on line to see how much of the film is true but I couldn't find anything) Still I think this is a film worth seeing. It's a beautiful film for adults with probably the best acting the leads have done.

(And for those who are wondering if I'm repeating myself- kind of. Yes this is based on my post from IMDB- but I also mis-labeled the post date and time which made it post waaaaay back in January for a couple of hours.)
Posted by Steve Kopian at March 09, 2011