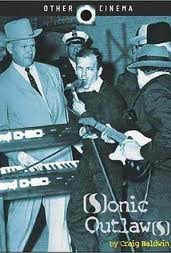 Craig Baldwin's essay/documentary on jam/cut up/found art, specifically that of the audio visual sort. Beginning with the story of Negativeland's infamous record U2, made from a mash of Casey Kasem out takes and U2 and then examining and commenting upon the people who do this sort of collage art, their legal troubles as well as the art itself.

Made from found footage itself this is a dizzying trip for about half its running time as we are forced to examine and consider the nature of art, all art as well as what is fair use and what should and should not be covered under copyright. The problem (and it's a minor one) is that about half way in the film begins to wear down you down as it seems that its running the same ground again and a again. Its not bad, and actually there are some great pieces in the second half like an explanation of collage's history, what happens when a montagist finds his lifted work has been lifted, and some good bits of art, but there is also a great sense of I've been here before. The up shot is that the euphoria of the early part of the film and its unique vision is replaced by just a mundane documentary.

Despite the fall off I can't help but highly recommend this film to anyone who creates, and who likes the mash up art that runs rampant on the Internet. You may not watch it more than once but some of the questions it raises will rattle around in your brain for a long time afterward.

Its referenced in tomorrows film RIP: A Remixers Manifesto and it does everything right that tomorrows film does wrong.
Posted by Steve Kopian at March 19, 2011