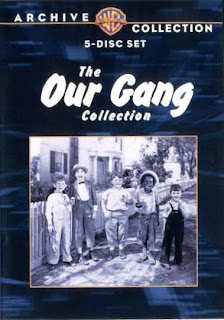 For those of us who grew up watching the Little Rascals or Our Gang comedies on TV there were only a certain number of films that were in the rotations. Based upon a recent release of the best known comedies there were something close to 70 shorts in the rotation, but in actuality the number was smaller since some of them seemed to be run all the time while others never were. Looking at books on the films as a kid I knew that it started as a silent series and then continued on. There were silents, the films in the TV package (from the advent of sound to when Hal Roach sold the series to MGM), and there were the later films which we never really saw, except as an odd airing as part of a time filler for a too short feature film. For anyone who saw and loved the TV films the chance to see the MGM films became a quest akin to looking for the Holy Grail.

The wait is over. Warner Brothers, as part of their archive collection, has put out a multi DVD set collecting the final 52 Little Rascal shorts. It's both a cause for celebration and for disappointment. The celebration is because they are at last out in their entirety, disappointment because as the reference books said they aren’t very good. Some of them are, especially when taken on their own terms. However before I talk about the joys let me talk about the problems.

The problems with the MGM series come from a couple of different points. None of them make the individual shorts bad, it just makes watching all of the films a potential long haul if you are going to do so in a limited number of sittings. Most of the shorts will work if you watch one or two at a time but the films can be a chore if you try to do a disc or more at a time. The biggest problem is that MGM stopped making individual hand crafted films and made them machine-like. If you watch the films in the set (they are ordered chronologically), you’ll notice that they cycle through in roughly a series of four with two being random, one set in the clubhouse, and one is a musical. The musicals went from “Let's put on a show” to just a performance with no context. If you love movie musicals blindly you’ll love these shorts, but for me the musicals were a real chore to get through; if nothing else the music is not very good. MGM made things even more machine-like than just repeating plot order by having many of the films follow a template, making the progression of the story almost exactly the same from film to film. The failure for them to work as a group is simply that watching them en masse is that you realize they are all plug and play. It's a situation that runs for six minutes then shifts to something else for the final two. It's a resolution that more often then not comes from left field.

Another problem is that Alfalfa (Carl Switzer) grows increasingly annoying. If you watch the progression of the series you’ll notice that his screen time varies and that during some of the music numbers he’s the only one around. The reason seems to be that even though he was under contract the studio, the actors, and the tech people grew to hate him. Somewhere along the way the self-centered, cocksure attitude that the character had became that of Switzer. Worse, Switzer developed a need to play jokes and disrupt things. It got so bad that they were doing multiple takes on a scale only matched by Stanley Kubrick because he was screwing around. If you watch one of the last films he appeared in calledAuto Antics (1939), you can see that the film is full of shots that don’t match and that takes end in break-ups or problems. The studio simply forced their way through the shoot and used whatever they had. When Switzer was done with his contract he was told he was done and that there was not going to be an extension, and he was effectively consigned to oblivion...only to do the odd role and then reappear briefly in a series of films as a late teen with several others from the Rascals who were too old. The series went nowhere and Switzer was back to the occasional role before his violent death several years later, making him a poster boy for the perils of child stardom.

Enough with the negative, what's positive about the set?

First off simply being able to see these long hidden shorts is a blast. As I said at the top if you love the best known shorts, it's great to see more films with the characters.

While many of the films are a bit rocky in their construction, if you take them on their own terms and watch the bits as bits, and not worry about a story with a beginning middle and end, you'll find that the jokes are wonderful. For example the chase in Auto Antics is wonderful and worth the effort to see. Alfalfa's Aunt is an amusing story of misunderstanding involving a murder mystery. Goin' Fishin is basically one long gag about taking a bus to go fishing and is very funny (it's also a prime example of why the films are good and not great; once it's set up the plot stops for the variations on a theme).

To be honest there is one near perfect short in the bunch and shows what the series could have been if a bit more care had been given in the scripting. Little Miss Pinkerton is one of the last shorts and it's one of the best. It concerns a window display that contains a mystery that could be solved for a prize. As things go along a murder happens and the kids get caught up in the middle of it. It's a solid mystery with a plot that has a beginning, middle, and end. It's probably the best film in the set and it's sad it came so late in the series. It's strong enough that, taken along with the good shorts, this one great film makes the set worth getting.

If you're a fan you'll want to track these down and watch them. Just go with the flow, understand some are better than others, and remember you can skip to the next one.