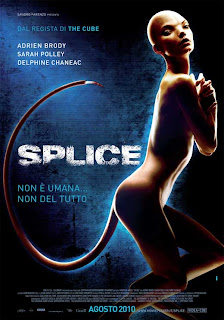 Scientists who have created a new species with an eye toward genetically created products decide to splice in human genes in their next go round. The resulting animal-human hybrid begins growing rapidly and there are complications.

Hailed by some as a masterpiece of modern horror and by others as a mess I fall somewhere in the middle.

The problem for me stems from the two leads played by Sarah Polley and Adrian Brody who are the two scientists. They are too cold and calculating; too hard to really like and it's real easy to see their fall from hubris. It's the sort of thing that you can see way before they do, even if you don't take into account that without the fall there would be no movie.

On the other hand the film does create a certain amount of frisson from the situations. In a weird way the small creature (and the original species) are genuinely creepy, especially intellectually. They will make your skin crawl. They are so creepy that you kind of go with what's happening because it's rare that a recent American horror film could make you feel this queasy just with an idea.

The film mostly manages to overcome its weaknesses until the final half hour or so, when things begin to spiral out in well-worn horror movie tropes. To me the fact that the film wasn't completely going the typical horror movie route won me over; however the final twists (and too many abilities by the creature) make what could have been a really good film into an okay one.

Worth a look, for what it gets right. It's almost a modern classic.
Posted by Steve Kopian at March 09, 2011