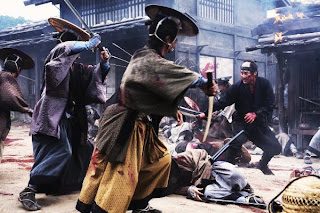 I'll be brief. A full review will follow when I can sit down and really do the film justice.

I attended a sneak preview of Takashi Miike's latest film 13 Assassins. It's a remake of a film from 1963.

The plot has a trusted advisor to the Shogun taking steps to make sure that the man chosen to succeed the current Shogun never gets the chance. You see the man is insane (he's one of the most evil men ever put on film) and if he takes the throne it will plunge the country into chaos. He convinces one of the samurai of the goodness of the cause and he gathers together the title people and sets a trap. It all explodes in a 40 plus minute set piece that ends the film.

One of the best films of the year.

Possibly one of the greatest action films ever made.

It's a worth successor to the 7 Samurai.

Yes it's flawed, it gets a little bit to get going, some the characters are not completely drawn and the villain disappears after a fashion...

...on the other hand it's emotional, masterfully done, and exhausting. I really need to write this up.
(addendum-IMDB lists the original running time as being 15 minutes longer than the 126 minute international version we saw. If that's the case then the problems sighted above may not be there in the longer version- I await the release of the directors cut)

We were told that the film will go on to Magnolia pay per view on March 25th and in to theaters on the 8th of April. If you can see this on the big screen. trust me go to the theater for this one.

Again- This is one of the best films of the year and an action masterpiece.

For those interested, Miike spoke after the screening via Skype. I saw some of it but left early simply because to stay would have meant I was waiting over an hour if a train if I didn't leave then. I'll post on what was said later- for now it's just bed.
----
Addendum
I had read on line that the film was coming on 4/29, but at the screening they said the information above. I was at the IFC Center today and they confirmed that the actual release date is 4/29 so thats the date to go with....
Posted by Steve Kopian at March 17, 2011