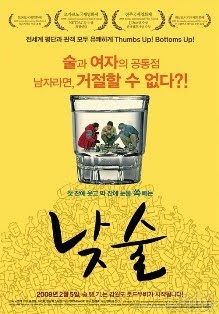 When I think of my beloved Korean cinema, what first comes to mind is violence, suspense, and varying degrees of psychological and physical antagonism. It was with unexpected pleasure, then, that this slight, yet memorable, bit of subtle comedy dropped in my lap a year ago thanks to the Korean Cultural Service’s biweekly run of free movies in Tribeca.

Daytime Drinking is truly an indie film – not just by Hollywood standards, whose budgetary extravagances make even the most visually stunning Asian films seem restrained. This was made with a modest budget by any industry’s standards, shot on location in the sparsest of settings and made up of first time…make that ‘one time’ actors (check the casting credits on imdb and you'll find that nearly everyone’s filmography consists only of Daytime Drinking).

This is also a slacker comedy in the truest sense – not a lot happens as the story ambles leisurely along for its two hour duration, and why should it? You’re too ambitious to be a slacker if you are running around doing all sorts of things.

The premise is simple: some college (or right out of college) guys spend the night drinking, when big talk of a road trip arises. Hyuk-jin, the one who is most reluctant to go, ends up being the only one to go. It’s the first, but not only, time that his passive nature gets him into trouble; in fact it is just as much to blame for his dilemmas as the titular drinking.

And so begins one of the most dysfunctional road trips you’ll see on film. If you’ve ever travelled off the beaten path expecting something grand, and ended up faced with a reality that pales in comparison, you will relate to what greets Hyuk-jin when he arrives in the sleepy town of Jeongseon. A palpable boredom hangs in the air, but before long, boredom is a pleasant alternative to the ordeals that lie ahead. It’s a series of misunderstandings, deceptions, and awkward encounters as things don’t quite go from bad to worse – it’s more like bad to weird to worse to weirder.

There is a unique charm to how the film’s elements come together. The South Korean countryside is shown in such a way that perfectly captures a sense of desolation and loneliness, as the main character is jaunted around Nowhereville, Korea. Yet the constant talk of small thrills, like “hot noodles with booze,” makes the small town amusements take on a strange appeal. The background music is a low-key jazz tune that underscores the movie’s shuffling pace, except when we get some tastes of “weird music,” the perfectly different beat that some of the characters along the way dance to. And it is the strangely likable assortment of oddballs and outcasts that shines the most, breathing such a peculiar energy into the film.

The ending is a classic, and speaks to the twenty-something male’s (or maybe it’s all of us) refusal to learn from past mistakes in his indomitable pursuit of the fairer sex.

Not a life changer, but a great little film. Then again, the next time you’re riding a bus and an off-putting girl offers to recite her poetry for you, you may think twice about refusing. You may even find yourself, if the mood is right, dancing to weird music…

Shout out to http://newkoreancinema.com/ for inspiring Korean film review mayhem!