Cat In Paris-NYICFF (and Don't Go) 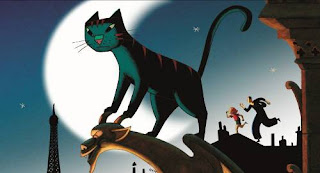 I attended the New York International Children's Film Festival screening of the Cat In Paris this Morning with Randi. It's a charming little crime film for kids...well, older kids. It's about a cat who splits his time between living with a young girl whose mom is a police inspector, and a cat burglar. Through circumstances she is thrown into an investigation of the man who killed her father during a robbery (not the burglar) and his gang. I need to do a proper write up to really explain it, and I will down the line.

For now know that the film is very good, with a plot that makes little real sense. It has great jokes, a few nice twists and a visual style that is worth the price of admission alone. It's one of the best films at NYCIFF this year.

As I said a full review will becoming.

Before the feature they ran the short film Don't Go. It's about Pinky and a cat. It's a blast and can be found by following this link.