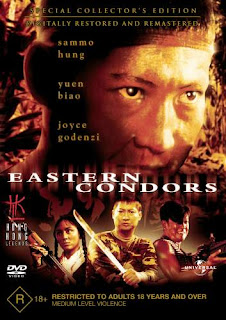 I get around to everything eventually and such is the case with Eastern Condors, which played at the last New York Asian Film Festival. I have been planning on writing this film up since I saw it but other things took precedence. My lack of attention in writing up the film is a classic example about how films get lost, things just get in the way.

The screening at the film festival was part of the celebration of Sammo Hung. The film, which is one of Sammo’s best films and one of his favorite, was something that the Festival Committee had been trying to screen since they first started doing the festival. Unfortunately each time they tried to screen the film there was always a problem from the ability to obtain a usable print to simply having clear rights to screen the film. Only weeks of negotiations from the Chinese Office of Economic Development (or something like that) got them permission for one screening. They secured a copy of the film that hadn’t been run in about 7 years from a private collector, which they never checked, they just ran it and hoped nothing would happen. (The previous year they had done something similar with an older film but the film jammed and then caught fire).

The film itself was a real blast. The Viet Nam war has been over for a while. Unfortunately the Americans fear that a secret stash of top secret weapons left behind are going to be found. So in typical movie style a team is assembled and sent in to get to the stash before the bad guys do. Of course things go wrong and the team begins to die.

This is a great action film. It’s dark and nasty and funny and filled with mind blowing action sequences. It’s the sort of film that is a perfect definition of the type of films that played in the grindhouses across the country. It moves along at a good clip, doesn’t make perfect sense, but is so entertaining that you forgive it anything. It’s one of the reasons that Sammo Hung became a break out star beyond the boundaries of Hong Kong.
Actually that the film made Sammo a superstar is odd in that the film is very atypical Sammo. Sammo has a reputation for being a guy who made films filled with a great deal of humor and not so much darkness. While the humor is here, there is also a great deal of darkness. The violence is troubling. It clearly shows the cost of war. It is one of the nastiest Viet Nam films you'll ever see.
I'm a fan of Sammo's and I think that one of the reasons that the film works is that the film stays pretty much focused on the central plot all the way through. There are many of Sammo's films that seem to take a left turn in the middle for no good reason (Kung Fu Chef anyone?). Others get overwhelmed by humor that doesn't belong. Here that never happens, the plot goes straight to the end and any humor comes from the situation.
I really liked the film a great deal. I actually liked it so much that I kind of beat myself up for never having watched the DVD that was in my collection for a couple of years.
This is a masterpiece of the action genre- which has, thanks to it being a twenty plus year old film from Hong Kong, fallen completely off the radar in the United States. Its a shame.
If you love action films you owe it to yourself to track this film down and see it. You will be more than pleasantly surprised.
Posted by Steve Kopian at March 04, 2011