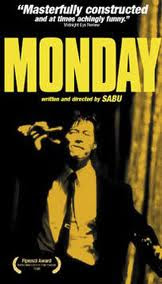 DB Here- This week it's a good number of films from the director Sabu. Many of the film appeared at the retrospective that the Japan Society ran at the end of January and the beginning of February. The reviews are being split between Mondocurry and myself, and it's to his assured hand that I turn for the first film of both our series and that of the Japan Society retrospective, Monday.