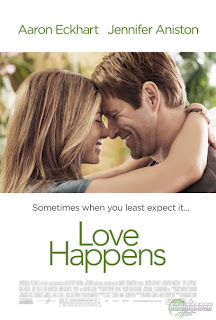 This is an odd little film.

The plot has Aaron Eckhart as a self help guru who is giving a seminar in the home town of his deceased wife. He still hasn't processed his wife's death in a car accident and is uncomfortable by the appearance of his wife's parents. In to the mix comes Jennifer Aniston as a photographer to whom he is attracted. How he reacts to everyone and begins to realize what is going on with in himself is what the film is all about.

As good as it is, its easy to see why it hasn't found an audience since the title is misleading and its not to "rom com" it was advertised as. If you can get past the uncalled for expectations then I think you'll find you've found a neat little film that you'll return to again and again.
Posted by Steve Kopian at March 02, 2011