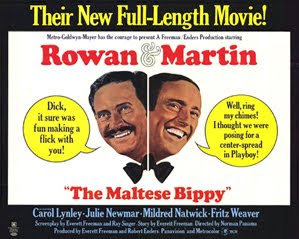 While I am a HUGE fan of Rowan & Martin's Laugh-In, the fantastic comedic series from the late 1960's that changed the face of television, the movie that it spawned, well, isn't quite up to snuff. A mildly amusing little romp, the "plot" centers around Dick Martin's character thinking he's turning into a werewolf, while his fast-buck seeking partner, played by Dan Rowan, looks for a way to capitalize on this feat of lycanthropy...which he has yet to actually witness. Along the way, you can play "spot the late 1960's/early 1970's celebs", by looking for Robert Reed (father Mike Brady of The Brady Bunch), Dana Elcar (FBI Agent Polk in The Sting), Leon Askin (General Burkhalter from Hogan's Heroes), Alan Oppenheimer (one of those "I know that guy" guys), and, starring as "the most interesting thing to look at in the film", Julie Newmar (one of the actresses to portray Catwoman in the Adam West Batman TV series). Newmar does look absolutely fantastic in this picture, which helps to pass the time, as the movie itself is really nothing to write home about.

Perhaps the most interesting thing in the flick, aside from Newmar, is how Rowan & Martin are cast against type. In this movie, Rowan is the zany, carefree, hare-brained scheme hatcher, and Martin is essentially the straight man who seems to be the victim of what goes on around him...basically the opposite of their comedy team and Laugh-In personas. You get to see a little bit of their "normal" act as the opening credits roll, and, unfortunately, that's one of the better segments of the movie. I wanted to like this more than I ultimately did, but perhaps someone who doesn't have the same affinity for Laugh-In wouldn't be left wanting more as much as I was. Alas, I think someone unfamiliar with Laugh-In would actually be more confused as to why these 2 guys were given a movie in the first place.

Turn off the brain, don't expect too much, and enjoy from a nostalgic point of view. And just keep ogling Julie Newmar. It helps.
Posted by Ken Fries at March 30, 2011