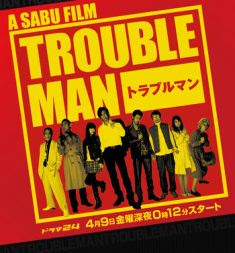 Mondocurry saw the version of this that ran at the Japan Society back in February as part of their Run Salary Man Run retrospective of the films of Sabu. The Japan Society didn't really say that what they were showing wasn't a "film" rather it was the second half of the series.

I was supposed to attend, but I over booked myself and there was no way I was going to get from the BAMkids Fest to the Japan Society in any mood to enjoy the film. The result was I deferred to less crazy heads and took a pass.

That was until I had the chance to pick the film up on DVD. I didn't realize what I had ordered until it came, namely the entire 12 episode series. Since I saw the entire series I thought it would be best to write that up as a counterpoint to the review of the Japan Society version.

I'm kind of at a loss as to how much I should reveal about the plot. Then again the plot can be explained simply its the execution that takes forever.

The series starts with some arresting images, the sound of a car crash is followed by the appearance of a burning tire, some burning people and a burning car. We also see the young man who will be revealed to be out hero Kazuo running down the street and towards us. The camera then follows as he runs. The sequence will be repeated in the final episode of the series as our hero runs towards his destiny.

The film then flashes back to several hours earlier and we follow the sequence of events as Kazuo meets various characters and they all end up in an apartment together. For the next FIVE plus episodes the series picks up in the apartment and then flashes back for the majority of each episode so that we know the back story of each character.

Its a tough haul since the central story stops dead and we end up seeing the same things over and over way too many times.

Once the characters are set the series kind of goes forward in later part of the second half and we realize how all of the too long set up ties together directly with Kazuo. Clearly there is a karma and no such thing as chance.

I can't imagine what it would have been like to see the short version of this since some of what you see in the early episodes makes what happen later have more meaning. Sure you could follow what happens if you didn't see the bits, it just won't mean as much.

On the other hand there is so much crap that you have to get through it kind of isn't worth bothering with the early stuff. (I don't know how far I would have gotten had I had to watch this on a episode by episode basis)

There is a great movie lurking in this over abundance of material but frankly I don't know how you would cut this down to find it.

For me, watching this film in it's complete 12 episode form I kind of felt that this was a paycheck job for Sabu. I think he wanted to see how far he could stretch a story but was ham strung by the TV structure which requires precise parts all the same length.

As I said there are these great moments all along the way but they never build to anything. Partly because the TV structure kills the momentum and partly because there is too much filler.

For me this is the weakest of Sabu's films. Its too much mediocre material swamping the gems.

I can't really recommend this. It's not bad as such it's just too much....

For Sabu fans only.