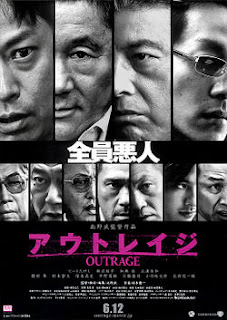 Takashi Kitano's return to directing yakuza films is a darkly comic tale of the lack of honor among all thieves.

The story begins when the big boss, The Chairman, discovers that two of his under bosses have an understanding based upon a jail house pact. In order to remain on the Chairman's good side one of the men sends his underling Otomo (director Takashi) to set up an office in the other bosses' territory. This sets in motion a seemingly never ending series of retaliations and power grabs. As someone said in describing the film it's bad guys and badder guys, with everyone upping the ante.

It's a bloody, violent, often uncomfortably funny film. It's probably closer to the real world of gangsters than anything we've seen since it's a film that is pretty much dog-eat-dog. There are no good guys with the police being little more than corrupt and ineffective, if they are even going to do anything at all.

I'm not sure what I think of it. Like most of Takashi's films it gets better as it goes on and you see what he's getting at. At the same time the seemingly endless body count kind of gets in the way of any point...or maybe not since the lack of a satisfying ending (at least in my eyes) is possibly explained by the fact that a sequel is coming some time in 2011.