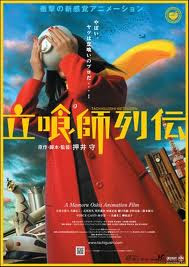 Mamorou Oshii's mockumentary of food freeloaders is damn near impossible to see. For some reason the film has never really had any real release outside of Japan (some people on IMDb said it has played France). In a weird way I kind of understand why. This is a very unique film in the truest sense of the word.

The story is told in a weird amalgam of photo realistic animation fused with normal animation. Characters have no depth and are 2 dimensional. There are some live-action bits mixed with other styles. Sometimes it looks like Jibjab gone berserk. At other (frequent) times it's static.

And then there is the dialog, or rather narration. It's a very heavy, very complex documentary style that tells us all about the various grifters we are seeing and the world they inhabit. Twenty minutes into the film I knew that I was in way over my head. I wasn't catching all the references, details, and odd bits. Yeah I could sort of follow what was going on, but it was clear that I was hopelessly lost. It's the anime version of Prospero's Books.

I have no idea what I think of it. I'm going to have to watch it again to determine that.

For now know that it's a very strange, very deliberate film. In its way it's a masterpiece.