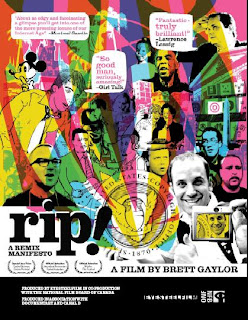 I was not going to review this film. After watching it the first time I found myself really ambivalent about it. It is and was a film that I admired for asking a great many really important questions, but on the other hand I have serious issues with the film with its construction, historical accuracy and what I perceive is it’s ultimate conclusion. On the other hand the film gets one talking and moving, even if it’s to toss the DVD across the room into the garbage or out the window.

Rip: A Remix Manifesto is Brett Gaylord’s look at copyright issues. Using the mash up songs of re-mixer Girl Talk as a starting point the film ponders the question of what is the nature of copyright and the fair use doctrine. It then spins off to discuss the right to use characters such as Mickey Mouse, movie clips, and patents for “living things” and other bits of science.

The film begins by asking is a song still written by the original artist if part is sampled. We are shown the degree to which someone like Girl Talk remixes thing and left to ponder. Gaylord even goes so far as to show some of the mixes to someone in the copyright office who is amazed at how the samples are used to create something new. The film argues strongly that the notion of remixing samples is a new art and what is created is something new, even if its built on the old.

From there the film branches out messily to look at Napster and the free exchange of music, the use of images such as Mickey Mouse, film clips, and ultimately the patents for things like medicine. Its at this point the film seems to be moving from the notion of fair use for creation into the realm of something else. The film seems to be arguing that its all fair game since ultimately we might be able to get a cure for cancer out of it (at least with the science bits) besides there is no way to stop it.

I’m not sure what the film is getting at in these parts of the film. The film drifts from its statement at the beginning to be about sampling as an art form that builds something new and suddenly the film is throwing in talk of people being fined hundreds of thousands of dollars for downloading songs. I was confused since I didn’t know why we were being told this.

Actually past the argument about the sampling I was never sure that the director knew what he was getting at. For a film that repeatedly talks about the history of copyright he leaves out vast tracks of the history of it, talking about the original copy right under Queen Ann being 14 years and then leaping ahead to the 1998 changes that boosted control of something like Mickey Mouse or Happy Birthday into a centuries long deal. Its’ a nice idea but he leaves way too much out the issues beyond sampling are not as clear cut as Gaylord makes out.(indeed even his seeming argument of a total free exchange of ideas is at odds with his early indication that copyright is good if used for a while.) Part of the problem is that he brings in so many ideas that many get lost, go nowhere or seem to be wildly off point.

The film further falls apart in its messy use of facts. Its dating of stories “remixed” by Disney is cockeyed from the outset when it dates Alice and Wonderland from 1644 (and it’s not even that it’s a use of character since the picture they use is of a Tenniel drawing.). For a film that repeatedly insists that the future must build on the past it has no sense of the bedrock its asking to use as a construction site. Frankly the film has no sense of history other than these things went before now.

As a factual film with dates and places and solid concepts the film is mess. Its like reading a newspaper article on a hot button issue that inflames you until you stop and think about what its saying and how its saying it and you realize that its badly argued and full of factual errors.

On the other hand, and the reason I’m writing up the film, it makes a good argument in favor of sampling and it will get you thinking about the whole notion of copyright. As much as I am annoyed by the film I find I can’t shake it and the questions it raises (however badly).

Worth a look especially if you can do so for free.
Posted by Steve Kopian at March 20, 2011