Mon Mon The Water Spider and House Hunting (Both 2006) 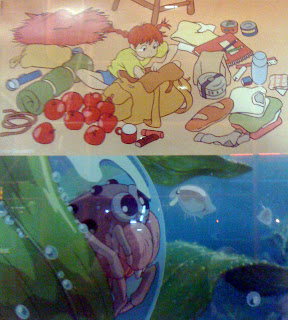 As part of the Japan NYC series (that was co-presented by the Japan Society and Carnegie Hall), they screened two of the "Ghibli Museum Only" films created by animator Hiyao Miyazaki, Mon Mon The Water Spider and House Hunting. In theory you're not supposed to be able to see any of the eight films created for the museum anywhere except at the museum, but now and again there are screenings outside of the museum, and outside of Japan. A few years back the New York International Children's Film Festival ran two of the shorts (one of which was Whale Hunt), but for the most part any screenings are rare.

I'm not going to go into a discussion of the screening itself, not get into details concerning the films; you can check out Randi's blog post for details on that.

Instead I'd like to talk about the films themselves.

House Hunting is a film best described as an experiment. There is no dialog (well other than a thank you), no music, and no real sound effects (though the sounds appear written on screen and there are vocalizations by two actors). The style of animation is best described as manga influenced. It's the story of a girl (in the notes she's called Fuki, but since there are no words there is no clue in the film) who packs up all of her possessions and walks off on a trip to find a new home (again it's only explained in the notes and nowhere else; for all we know from only watching the film this could just be a hike in the wilderness). As she walks through the countryside and forest she stops here and there offering gifts of food to the various spirits she meets along the way.

It's a charming, but lightweight and breezy little film that was for me a trifle. It's got some great moments, some nice character design (including a creature best described as a feral Totoro), but it doesn't add up to much. You'll laugh, you'll smile, but it's nothing I'd go back and see for itself. It's nice, but as a stand alone film there isn't much to it. Had that been the only film screened I would have been really annoyed.

The plot of the film follows Mon Mon, a water spider, as he builds his underwater nest, collects oxygen, eats, and tries not to be eaten by bigger animals. One day he spies a female water strider gliding across the surface of the water. He is smitten and begins to think about her. She really wants nothing to do with him...but one day circumstance puts her in danger and Mon Mon has to go to her rescue.

That maybe telling you too much, but I think not. I'm guessing that you could probably figure that much on your own. Truthfully it wouldn't matter since the way the film is done, I could probably tell you everything and you'd still be blown away by it.

A masterpiece of art both in the animated and the still image mediums (the individual images in this are beyond spectacular), this is a film that shows how grand animated films can be. It's a film that should rank with the greatest works of art from across the ages. (And stop going "eeww, but spiders are icky"; you haven't met Mon Mon)

Okay, forget the high art talk, let me come back to earth and just say this is a wonderful little love story. It's a fifteen minute romance that is so much more touching and emotional than most two hour Hollywood romances. When was the last time that you just sat there smiling from ear to ear and had your heart strings plucked and stroked? When was the last time you saw a mismatched romance that felt good and right and just worked in a believable sort of way? (Okay it's a cross species romance but you know what I mean)

It's the sort of thing that made me happy to have spent 15 bucks to see two movies that ran half an hour. Hell, I would have spent more than that just to see Mon Mon, which is saying a lot considering how few films there are that I would spend even a dollar to see.

If you can manage to see either of these films, and especially Mon Mon, do so. The likelihood of that happening I know is small outside of going to Japan and the Ghibli museum (there is a note in the Carnegie Hall Program which reads: "The Ghibli Museum has advised that all requests for further screenings outside of the Ghibli Museum in Japan must regrettably be declined"), but hope springs eternal and quite frankly I never thought I'd get the opportunity to even see this screening.

Until then consider these mostly Unseen Films.

(A HUGE Thank you to John for taking the above picture on his I-phone and sending me it to me. It's from the poster that was outside of the screening and spared me from having to choose which picture to use for the post; simple use the one Carnegie Hall chose)
Posted by Steve Kopian at March 28, 2011