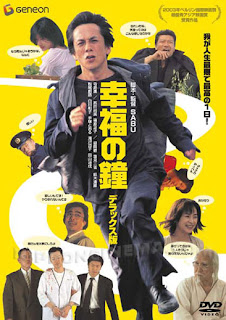 You could consider the Blessing Bell to be the first film in the second stage of Sabu’s directing career. Moving away from some of the manic craziness of the lives of salary men, the focus shifts to the meditative contemplation of a blue collar Joe who has lost his job.

The plot of the film concerns an unnamed man who walks off from this place of employment on a journey of contemplation.

Along the way he meets various people who are at differing points of their lives and they impart observations to our hero who remains completely mute until the final moments of the film.

A very deliberately paced film, it’s a film that can’t be called anything other than slow. I don’t mean this a slap to the film, what I mean is that this is a film that shows us some things then gives us time to contemplate what we’ve seen, then shows us some more. It’s a film that uses Sabu’s typical quirkiness but it’s turned on it’s head in a very real portrait of life. In order to compress the journey down to 88 minutes things had to be that way and it makes sense.

In reading on the film everyone talks about how the film covers a 24 hour period after the factory closes, but I don’t think that’s right. If you pay attention to what happens the film actually takes place over several days…or not, the final scene blurs things further and ultimately makes you wonder if any of it happened.

It’s a film that forces you to engage with it and figure out it’s mysteries. I would guess that had Sabu appeared at the Japan Society screening he would have been tight lipped about some of what happens, which I think is fitting since the film is like life, the sort of thing you have to work out for yourself.

I really like the film a great deal, though I suspect that I admire it more than I like it. I’m curious how a second viewing will effect me.

If you do see the film, which I recommend without reservation, I do ask one thing; watch it from start to finish before you decide how you feel about it. The film is very much a journey and like any journey or like life what you experience on the way is not the destination. I know my feelings bounced all over the place while watching the film and it wasn’t until I got to the very end that I had an AH HA moment. While all Sabu films are like this, this is one film that really really requires you go all the way through it since this is a film of building ideas and emotion. When you get to the end the pay off is, or was for me anyway, worth the uncertain journey.